Before and After Photos – 40 Days Growth in a Portable Farm

Growing Tomatoes in Aquaponics
-by Colle and Phyllis Davis 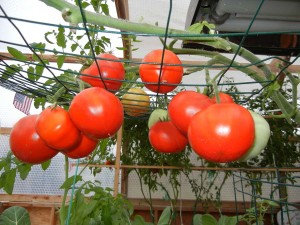 (Photo above) Each of these tomatoes weighs approximately 1/2 pound. We harvested them from a Farms® Aquaponics System. THEY ARE DELICIOUS.

Tomatoes are the single most requested crop to grow in the Portable Farms® Aquaponics Systems. The expected yields in this article are based on growth from a single Grow Tray (shown below) and are very conservative. They are based on the lowest yield per plant, the shortest harvest cycle and the longest time a plant will remain in the Grow Table of the system. The actual production and yield is often two to four times the stated amounts in most cases especially after the operator becomes more skilled. 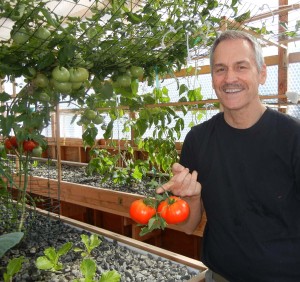 Tomatoes that have been planted and raised from a Portable Farms® Aquaponics Systems can be sold as locally-grown and pesticide free and after certification can also be called ‘organic’ meaning the grower can receive higher prices based on their growing methods and further reducing the ROI than stated in this article.

Tomatoes present an interesting opportunity because of two factors: The first is that all tomatoes must be staked or trellised (vertical growing) to maximize yield. This keeps the plants upright and allows the utilization of the entire column of growing space from the Grow Table’s surface to the area 2m (6 feet) or more above the Grow Tables. Trellising can be seen as a type of natural vertical gardening. Trellising also makes harvesting much easier because the fruit is more readily accessible. Pollination is also easier due to the open access to the blossoms. Circulating fans are very effective in the pollination of most plants and reducing the humidity and heat when the plants’ blossoms are opened up on trellises.

To successfully grow tomatoes and other blooming plants (peppers, cucumbers, beans, etc.) year round requires the use of Grow Lights suspended above the Grow Tables in a climatically adapted environment. The investment in the Grow Lights and electricity for the purpose of growing blooming plants is offset by the increases in both variety and production.

One of the challenges with tomatoes is to determine how long to leave the plants in the gravel before removing them and replanting in the same spot in the gravel. The recommended spacing on tomatoes is 30cm (12 inches) and not to offset the rows for maximum outreach of the plant’s growth. Our research discovered that the plants begin to produce tomatoes at 81 – 89 days (depending on conditions) but after approximately six to eight months of growing in the gravel, the tomato plants develop such a large root ball (the size of a football) that they began to impede the effective flow of water through the Grow Tables. This is especially true when a Grow Table was planted with only tomatoes. This root ball’s large sized necessitates the removal of the mature tomato plant after the sixth to the eighth month. The immature tomatoes can be harvested before the plants are removed to add to the overall production. The gravel in the area is then cleared of root fragments, and a new plant is immediately placed in the same spot. This process is thoroughly and carefully covered in the Operations Manual© provided with each installation. 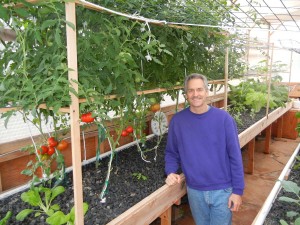 Colle Davis, Lead Inventor, CEO of PFAS LLC, standing in front of a few tomato plants (10′ tall) that supply hundreds of tomatoes while they’re planted in a Portable Farms Aquaponics System. We generally leave the tomatoes in the grow trays about six months and then replant new tomatoes because their root systems grow too large (size of a football) for the grow trays.

Each Module contains one Grow Table, one Fish Tank and one Clarifier. The components to make the Module functional include the Portable Farms® Kit with the special pump and valve system, a control panel, air pumps and related hardware and wiring.

Each Module cost approximately US$3,300 completely installed. This does include the growing medium (gravel), but not the seeds or fish because the owner will be in charge of the seed variety and the fish will be procured locally at best prices.  The Modules require being housed in a climatically adapted greenhouse with one or more thermostatically controlled exhaust fans. In cold climates, more insulation is needed and in the tropics, the sides can be screen or netting.

By using the lowest yield with the shortest harvest season and two crops per space per year the Return On Investment will be approximately 55lbs per week at US$1.00 (very low price) or US$55.00 per week x 52 weeks = US$2,860 or a 1.4 year pay back. This does not include the greenhouse. In most cases this number will be much higher and will continue to rise as the operators become more skilled.

Please note: The above numbers are based on the lowest expected yields from field grown crops, using the shortest possible harvest time, plus the longest time from transplant to finish harvest. In other words, the lowest possible output from the Module for this crop is shown. The actual output from each Module can, and probably will be, from two to four times as high resulting in a much shorter ROI.