Owning Your Own Personal Wetlands

Processing Fish – From Tank to Table
– by Colle and Phyllis Davis

Aquaponics is an up-close and personal experience with the cycle of life – from seed to salad and from fish fry to fried fish. With aquaponics, there is no escaping the hard facts of growing and eating what you kill. However, in most urban cultures in the Northern Hemisphere, the very thought of the topic of food-origins sends shock waves of revulsion through ‘city folks’ nervous systems which is followed by a slight gag reflex. And yet, these are the same people who enjoy a good hamburger, barbecue pork ribs, or an occasional rack of lamb without a second thought about how that piece of meat was prepared before it was served to them. There is a ‘disconnect’ that is common today for the growing population of the world that has had no contact with farming or agricultural practices.

Even 50 years ago, most people in the world were second, third or fourth generations removed from ‘the land’ and had a better understanding about the efforts for growing, harvesting, ‘killing’ animals, and preparing the meat for meals. That is not true today, but it is changing and those involved in the green-movement have begun to seek out opportunities for nutritional organic fruits and vegetables, free-range chickens and organic eggs, organic beef and lamb, etc. This ‘back-to-the-land’ resurgence is a search for fruits and vegetables grown without pesticides, toxic chemicals, and GMO seeds and has become focused on eating fresh, healthy food grown for human consumption.

Urban, modern kids today think of ‘fish sticks’ as being food from McDonalds, but if mention fresh fish to them, they do a double-blink and say, ‘Ohhh, slimy. Ugh.’ {Some references state that McDonalds uses more than 11 million pounds of ocean fish per year to meet customer needs. That’s a lot of fish.} 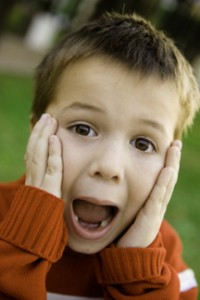 Thousands of children and young adults have toured our Portable Farms Aquaponics Systems over the years. When Colle or I speak about Portable Farm™ Aquaponics Systems to groups of young adults, someone inevitably asks, ‘How do you kill the fish?’ In most cases, a student will ask the question after the presentation is over and after standing near us for a few minutes, they will lean toward us, lower their voice and whisper the question.

Our response is, ‘You lay the fish on a cutting board, carefully place a sharp, thin-bladed knife a short distance behind the eye so the blade is perpendicular to both the side of the fish and the sharp part is pointed toward you. Then press the knife quickly through the fish and turn it 90°.

You would have thought we had revealed some horrible dark and scary information. The person rears back, draws their head down into their shoulders, looks at us in disbelief and says, ‘YUCK. Really? That’s awful.’

Our response is, ‘Do you want to eat them alive?’

And, then we comfort the child and make sure they’re not going to vomit on our shoes.

Here is some good information about preparing farm-raised Tilapia after you take them out of the fish tanks of an aquaponics system:

Go on YouTube to see lots of ways to ‘prepare fish’ Here’s a method we agree with and use ourselves: http://www.youtube.com/watch?v=iOTNTN8IFOw

After the fish is dead you will need to decide what the finished product will be for each fish.

For example, are you going to fillet it? Or simply clean and cook the whole fish on a grill or in the oven?

If you are filleting the fish, PLEASE USE A VERY SHARP FILLET KNIFE.

Scaling the fish is unnecessary if you are filleting it. Make a cut down each side of the back fin from the back above the eyes to the caudal peduncle (area connecting the tail to the body). Make a cut from the top of the back down behind the gills to the area below the gills.  Carefully cut the skin off down to the base of the ribs, all the way back to the caudal peduncle. Cut the fillet off the area from the backbone to the middle of the ribs. Voila, fillet. Repeat on the other side.

Gutting the fish is done by making an incision from the area where the gills meet on the bottom of the fish, back to the vent. Open the cavity and remove the intestines and wash the cavity thoroughly. This video shows how to fillet a fish (not a Tilapia, but a salt-water fish) but the technique is the same. http://www.youtube.com/watch?v=ZVI9nP2U8gc

Our favorite way to prepare the fish is to scale and gut them and grill them whole. Make sure you scale them well or you will be picking scales out of the meat. Garnish with lemon juice and lay on the grill. Yum.