Duckweed to Feed Tilapia in Aquaponics – The Food of the Future

Aquaculture and Aquaponics are NOT the same!

Aquaculture and Aquaponics are NOT the Same Thing!
– by Colle and Phyllis Davis

The U.S. government is pushing for increased farm-raised fish production (in order to erase a seafood trade deficit). Estimates are that half the fish consumed worldwide will be farm/tank raised by the year 2025.

The main difference is that aquaponics’ tank-grown fish grows fish as a primary resource for the nutrients (primarily nitrogen) in the water to grow healthy vegetables. Portable Farm’s technology removes the heavy fish waste from the fish tanks before that nutrient-rich water flows through the grow tables. 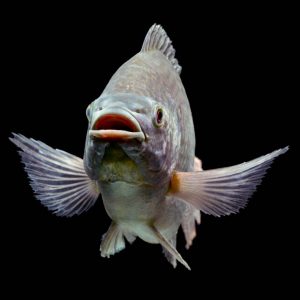 The word aquaponics comes from words ‘aquaculture,’ which is the cultivation of fish or other water-based animals, and the word ‘hydroponics,’ where plants are grown in a sterile medium or completely in water.

Aquaculture is about the aquatic farming of fish for food.

“Fish farming has often been touted as an extremely efficient way to produce animal protein: the Global Aquaculture Alliance claims 100 kilograms of fish feed can deliver up to 15 times more meat than an equivalent amount fed to cows. The industry has gained international traction, with farmed fish surpassing wild-caught ones (pdf) in the global food supply in 2014. But traditional fish-farming methods come with significant environmental drawbacks. For example, salmon farmers in Norway and Chile—the world leaders in salmon production—typically use open-ocean cages that corral fish in suspended netting or pens. This setup allows waste to flow directly into the environment, along with pathogens and parasites that can infect wild populations. Open-air pond farms—found worldwide and representing the most common type of aquaculture in China, the top global producer of farmed fish—also have a track record of polluting local waterways with fish effluent and veterinary medicines that are used to keep disease at bay.” Scientific American, The Future of Fish Farming May Be Indoors. New advancements in water filtration and circulation make it possible for indoor fish farms to dramatically grow in size and production, By Laura Poppick on September 17, 2018, 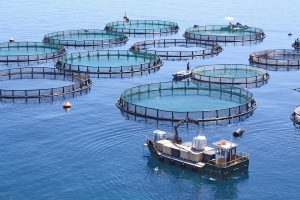 According to Wikipedia: Aquaculture, also known as aquafarming, is the farming of aquatic organisms such as fish, crustaceans, molluscs and aquatic plants. Aquaculture involves cultivating freshwater and saltwater populations under controlled conditions, and can be contrasted with commercial fishing, which is the harvesting of wild fish. Mariculture refers to aquaculture practiced in marine environments.

Can the Oceans Keep Up with the Hunt?

The reported output from global aquaculture operations would supply one half of the fish and shellfish that is directly consumed by humans, however there are issues about the reliability of the reported figures. Further, in current aquaculture practice, products from several pounds of wild fish are used to produce one pound of a piscivorous fish like salmon.

Particular kinds of aquaculture include fish farming, shrimp farming, oyster farming, aquaculture (such as seaweed farming), and the cultivation of ornamental fish. Particular methods include aquaponics, which integrates fish farming and plant farming.

Raising fish in netted cages in coastal water is often promoted as a means of easing stress on overfished populations. But, just like large scale agriculture, it has its downsides.

The main concerns about aquaculture include:

Of course, wild fish often costs more than farmed fish due to the expense of harvesting. And environmental factors can make the availability of wild fish inconsistent.

But the health benefits are clear.