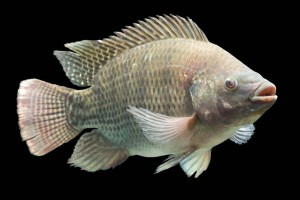 Some farming operations are using a technique called aquaponics to cultivate fish and vegetables or herbs together to produce two or more products in the same water based system.

Since 2006, Americans have consumed over 1 pound of tilapia per person each year. Predictions suggest it will remain a popular selection due to its mild flavor and taste, versatility in preparation, and competitive prices.

Tilapia has progressively grown in popularity since 2002 when it first entered the top ten list of the most frequently consumed seafood products in the United States. It is currently the fourth most popular type of fish behind tuna, salmon and Alaskan pollock, and the third most popular aquaculture or farm raised seafood product behind shrimp and salmon.

Types and Sources of Products

Tilapia is probably the oldest farm raised fish in the world. Stories from biblical scholars suggest it was the fish used by Jesus to feed the crowds at the Sea of Galilee, the so-called ‘St. Peter’s Fish’. Today, over 80 nations produce farm-raised tilapia including the United States. China is the largest producer accounting for over 50 percent of the world’s production.

There are many different species of tilapia. Aquaculture producers have developed various breeds or hybrids that grow efficiently to market size and have desirable appearance and flavor characteristics. The approved market name for all varieties is ‘Tilapia’, and the three primary species in the marketplace are: Nile or Black tilapia (Oreochromis niloticus), Blue tilapia (O. aureus), and Mozambique or red tilapia (O. mossambicus). Although the species names imply different colors, the edible fillets or portions are very similar and more influenced by growing conditions and feeds than external colors.

Tilapia is a hardy herbivorous fish that feeds on algae or small aquatic plant cells, and is primarily raised in freshwater systems using cages, ponds, raceways or open waters. The water conditions in the farming operations have an important impact on product quality and taste. Tilapia has been called the “aqua-chicken” because of the breeding improvements and mass production methods that evoke comparisons to the land based chicken industry in the United States. Organic production methods for tilapia have been developed and some producers are seeking official recognition for their products.

Tilapia is popular because it is a mild flavored, white-fleshed fish that is available throughout the year at a competitive price. The most popular product form is skinless and boneless fillets ranging in size from 3 to 9 ounces (5 to 7 ounce fillets are the most common). Various processing and packaging methods are used to ensure that fillets have a mild flavor and retain their bright red color. During the early years of production, tilapia from some sources had unpredictable off-flavors that were associated with water conditions and certain types of algae from different freshwater farming operations. However, recent production improvements have introduced methods to prevent the development of off flavors and screen products to ensure that flavors are uniform.

As the tilapia market has grown, some efforts to creatively market this species or illegally change its name to something more appealing such as sunshine snapper, cherry snapper and pink snapper have occurred. Substituting tilapia for a more valuable species is also illegal, but stands as testimony to its quality attributes.

Tilapia has a low to moderate fat content, and is a rich source of high quality protein. A nutrition label for a 3 ounce cooked portion of tilapia is provided. Nutrient levels can be affected by the ingredients and cooking method used to prepare tilapia fillets.

Tilapia is a sustainable farm-raised product. Because tilapia are herbivorous fish that feed on algae, there is no need for feeds produced from wild caught fish. Raising tilapia in some ponds or other small water bodies can actually help improve the quality of waters compromised by excessive algae blooms.